Mills and Boon : bury it or burn it 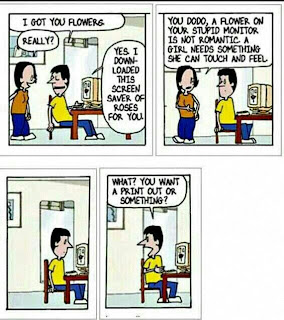 I think Mills and Boons should be banned in India for misleading young minds, like mine (I mean the time when I was young). This book made us believe that :-

1. Silent ...brooding men make great partners.
2. Opposites attracts.
3. The Man...who is no less than a superman would read the damsel in distress' mind and would come to the rescue.
4.Romance full of passion.

Silent brooding men make boring partners. Try having a conversation with them . The answer would be either "hm" "okay" "achachaaaaaa..".

You seem more interested in their birthdays then them. Ask them about their birthday plan "What so big deal about birthdays, anyways? I would rather work than waste my time cutting cakes."

Their reactions towards your gift, most probably would be :- he would stuff your gift in his cupboard (at least in front of you and then maybe in the evening he might be seen using it) or if you are lucky enough he would open the gift right away and the first thing he will utter is not 'thank you" or "wow" but " How much did you spend on it?"

Try going out for a movie with this man... say Andaaz Apna Apna. He would watch the film with out any smile just like a robot. If you smile ....god forbid laugh, he would look at you and you could only wonder "If looks could kill, I would die 1000 times a day.

No holding hands in public and No talking or laughing in public. "There is something called "Public etiquetes" After listening to that crap all u do is roll your eyes and give up.

The best option for spending time together without biting each others head off,  is none other than Long Drives. We don't need to hold hands or laugh and we don't need to talk. All you need is some Good Music. Well music you like ( hard rock or old songs) is noise and boring to him and the music he likes (Gazals ) are like lulla-bye to you.

Movies : This man can watch Godfather zillions of times. Other than Al Pacino and the bloated guy...you have trouble remembering most of the other characters in the film. Well you could watch pretty woman zillions of times, but just the mention of it make him go off to sleep

Romantic Dinners : The food he likes is Roties and subzies (which makes you wonder, why did u even bother coming out for dinner if you had to have ghar ka khana( home cook food) )

He won't cook, clean ,change the bulb or get rid of a cockroach or lizard. It's all your job. You act more like a damsel in shining armor and your husband happily takes the role of knight in distress.

Romance : He is married all right... but he is married to his work and the second wife is Television most importantly Cricket and stock Market.

So girls and guys who read Mills and Boon or Harlequin romance , please throw them away, burn them , bury them. They totally and completely mess up your mind. You just fail realize they are fictional characters and real men are not like that. Real Men are not 6 foot tall with broad shoulders. They don't talk romantic stuffs all the tym or take you out for candle-lit dinners. Real Men are goofy yet cute ; Stubborn ass yet lovable.

Email ThisBlogThis!Share to TwitterShare to FacebookShare to Pinterest
Labels: My thought processes