My Platinum Day of Love

Aren't arranged marriages just beautiful? Your parents happily propose a boy on your behalf and all you have to do is to look pretty and pretend that all that is laid on the table was made by you. Vikas and I had an arranged marriage. The first month of our marriage was all about holiday (I hate the word honeymoon) awkward moments, talking softly and putting our best foot forward. 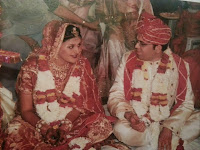 Soon after the holidays we shifted in our new house. My life seemed to have started fresh altogether. Not only marriage and my husband were new to me but also the city and its people (I am from Kolkata and Vikas worked in Mumbai). People in Mumbai are very detached; most of them had no idea about the residents of their building. Kolkata was very different, we even knew our neighbors' relatives. Mumbai was fast Kolkata's slow pace had its own charm. I really missed being in Kolkata especially road side food ghugni & puchke (Gol Gappe). Vikas would always take me to those fine dining restaurants where we would have that typical old boring food. Frankly, if we were to look at same north Indian menu every time we eat out, what’s wrong with home cooked food?

My life had changed drastically. It felt like from being a careless lad, I was made to sit on the King's throne and take charge of the kingdom. I remember Spider-Man's uncle once said 'With great power comes great responsibility'. My biggest responsibility was decorating this new match box sized apartment, finding maids, running errands and making this house look like a home. It all seemed way too easy. After all I am a woman, decorating and setting a household is practically in my chromosomes. All women do it with such aplomb.

Vikas coming from an extremely male-dominated Jain society was hardly of any help. He would throw his socks around, never keep his shoes inside the cabinet and would throw his wet towel on the bed each morning. But I was determined to become a good homemaker.

As soon as I started unpacking the gifts we had received i.e after 6 crystal Ganeshas, two hot plates, three DVD players, 5-6 vases and countless silver wares, I realized none of them were of any use to me. Yay, that meant I had to go shopping. 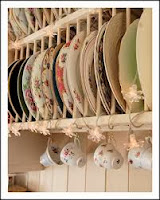 I bought a lot of paintings, crystal showpieces and my major chunk of money went into crockery that was supposedly original China. As a kid, I always dreamt of eating on fine china plates and drinking from the finest crystal glasses.

After I was done rearranging my things and making my home livable, I decided to give it a final touch. I started stacking the china plates and other crockery pieces in the kitchen rack that seemed sturdy enough to hold the weight.

After I was done with my work, I decided to take a shower. I felt fresh, got dressed tastefully and topped it up with some evening make up. I finally felt like the queen of the house. I was proud of myself. I really wanted Vikas to feel the same about me. I switched on every single light and the very next second, the doorbell rang. I ran and opened the door.

Vikas entered and as always he threw his socks and his shoes near the entrance, before I could protest the entire house shook with a loud crashing sound. I could hear the glass plates crashing on the floor and breaking into pieces. I rushed to the kitchen only to find all my hard work lying broken all over the floor. Something shattered within me. I thought of myself as one awful wife; a good for nothing housewife.  I bent down and picked one of those broken plates and started crying uncontrollably. Vikas who was standing behind me stood speechless. I knew he was going to shout at me. I have ruined my chances of ever being taken seriously. I am going to be nothing but one goofy wife whose husband pokes fun at her in front of his friends. With that thought I started crying even more. Vikas finally asked "What happened, why you are crying?"

"Can't you see what happened?" I pointed towards the plates and tears started rolling again.

"They are just some stupid plates. We'll buy new ones. Why are you crying for this?" Vikas looked really confused. 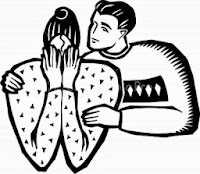 "Can't you see it's not working out? You don't help at all. You throw your shoes and socks all over the place. You put your soiled towel on the bed. And now you shut the door so hard that the entire kitchen rack came down (I knew it was not his fault, it was mine, I should have known the rack won't be able to take that much weight.)." I kept crying and blabbering. Finally, Vikas sat next to me and hugged me hard.
“Okay, I am guilty about the socks, shoes and towel. But how can you blame me for the rack. That’s not my fault.” He spoke in his defense.

I was not in the mood to listen to him “It’s your fault.” I said as a matter of fact.

“No it’s not”, he sounded amused than angry.

“Yes it is,” Of course it was his fault. As soon as he entered, the kitchen rack fell. “Why are you smiling?” I was confused.

"Can you see the silver lining? We are finally talking. It was suffocating that we hardly talked and we had to think zillion times before we spoke. Now we can finally be ourselves. I am actually glad this damn thing broke. Now we sound like a normal happy couple."

"From which angle do YOU sound normal and WE sound happy?" I looked at him confused.

"Oh trust me, I love it. As for the socks, shoes and towel, I promise I won't do it ever again. But the rack was not my fault” Before I could protest, he gave a slight peck on my lips.

"Let’s just leave these here and go out for a dinner. Tomorrow I will take a day off and we'll see what we can do about the kitchen. The rest of the house looks awesome.".....and he looked at me earnestly. For the first time I realized he had beautiful green eyes. I was not really an expert on love but all of sudden I was brimming with it. I knew the man I hated just a few minutes ago was the only man I would like to spend my life with and grow old with.

I smiled and said "Sounds great. But this time I don't want to go to a restaurant. Can we go to Juhu beach instead?" 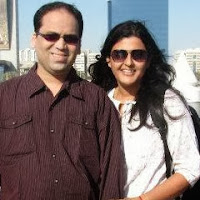 This is one of those rare moments which needs to be celebrated because it is pure and eternal. It is devoid of all the extravagance and superficial romance. This memory would always be a part of our lives, even after either one of us is gone. What better than celebrating it with Platinum which is equally rare, pure and eternal?

Thus it is our platinum day of love. A platinum day of love need not be planned and extravagant. It’s that day when the realization sets in that he/she is the one. This moment was truly special because the magical transformation from arranged marriage where we were tied to each other by our family strings broke and gave way to love marriage wherein we truly wanted to be together. We've had zillions of romantic moments afterwards but that day and that time is going to be etched in our minds forever because that was the day we finally fell in love.