Before I begin,I need everybody to know I am just a house wife. I need to make it clear that what I write is my personal view. I am not pro BJP and I am not being paid to write this by any party or person.

I am not a political analyst. I don't even aspire to be one in future. Politics was a always a dirty word, but in recent times it has become dirtier and murkier than it was ever before.

Let me begin with a question....

What is good government?

Thomas Jefferson : The care of it's citizen's life and happiness and not their destruction is the only legitimate object of good government.

Tony Abott : I understand that government should live within its means, value the money it holds in trust from you the taxpayer, avoid waste and, above all else, observe the first maxim of good government: namely, do no avoidable harm.

According to me a good government is the one that can make the citizen look up to them. Make them feel secure in and out of their homes. Assure them that nothing would happen to them and that they have our backs. The government that can make it's citizen feel proud and not hang their heads in shame.  The government that can make the society livable with good roads, safe drinking water , good and affordable homes and affordable and edible vegetables and above all freedom to go out in the middle of the night and come back home without being robbed, assaulted or RAPED.

I just read somewhere A good government remains the greatest of human blessings and no nation has ever enjoyed it. I wouldn't say Congress-led government is worst ever...that wld be exaggeration. But It has been  by far the worst government I had to face in my adult life (I am 32 yrs old).

Seeing what Congress has done to us in last 10 yrs. The concept of Good Government seems like an oxymoron.

Consider this, when the UPA government took over from NDA there were 9 States and 76 Districts that were Naxal infested. Now, latest reports say, there are 18 States with up to 250 Districts that are Naxal infested. So, would we be wrong if we say the UPA government, far from fighting, is actually nurturing Naxalism? The number of armed guerillas by the time NDA finished its tenure were less than 7000, now, during UPA-2 they are estimated to be more than 13,500.

In short, I could say UPA doesn't have our backs . In stead they put our backs in front at the time of war and attacks.

A good government should live within it's means, value the money it holds in trust from the Taxpayer and most importantly avoid waste.

Bharat Nirman is a good example to prove my point.

The entire Bharat Nirman campaign costed the poor us a good 100 crores. We pay around 60% of monthly income as tax back to government, hoping we would get good roads, 24hrs. electricity better infra structure.But see how they use our hard earned money Rs 100 crore is no small amount. They increase Diesel prices, Petrol prices, GAS rationing and Service Tax with excuse of "Paise Ped Per Nahi Ugatae Hain" I think they do need reminding that "Paise pedh pe nahin ugate hain"

Why are they showing Sonia Gandhi picture in the ad? Sonia gandhi is the president of Congress but she holds no place in the government. If it's a congress ad ...congress should have paid for it and not us.

The sad part you are making roads in the remotest corners.... while der r hardly any roads in the metropolitan cities.

It's the cities where the real 'tax paying' India lives. Don't we deserve roads? In spite of keeping funds for road repair...roads continue to be pothole ridden.Where does all the money go?

July 14 2011, Soon after Mumbai terror blast, our so called youth leader, Congress spokesperson Mr. Rahul Gandhi said "It is very difficult to stop every single terrorist attack." (Thank u for being this comforting, you just successfully made our lives more miserable than it was. Government themselves agreed they can't stop terrorist attacks, we r left to fend for our own selves)

Are we city dwellers are happy?

Inflation, price rise: Increase in prices of every basic commodity, including grains. No Jobs. No safe drinking water. No roads. This Government has generously sold everything to the MNCs, just to further inflate growing economic woes. Instead of concentrating on the home grown industries, it is blindly inviting international market players to promote already established brands, which is not necessary for the country.

If most of the pockets are empty who do u think is going to invest in these brands?"

Okay, Do you really think the people living in villages are happy?

According to the official reports  2,70,940 farmer suicides have been reported throughout the country over the past 17 years. For 2004-12, the number is 1,46,373, at a much higher annual average of 16,264 suicides. So rural guys...farmers don't seem very happy with the current government either .

So who's the happiest of us all?

Other than Foreign and Domestic Big Business houses and Politicians...nobody seem to be very happy with the current government.

In this I would like to put forward the example of Air India. Air India's management has given up 32 of its most profitable routes and best timings for the benefit of foreign airlines such as Lufthansa, Air Arabia and domestic private airlines such as Jet Airways and King Fisher. When Air India needed only 24 aircrafts, Praful Patel and Arvind Jadhav have ordered 111 Boeing 777 and 787 aircrafts. This deal has saved Boeing, the aircraft manufacturing American company from sinking, but sunk Air India as a loss making company! They also given Air India's prime land in Kalina in Mumbai worth 65,000 Crore Rupees to the private company MIAL and prime lands of Air India in Delhi worth 35,000 Crore rupees to the private company DIAL, both free of cost! Similarly, they have handed over valuable ground handling assets of AI to SATS free of cost! Thus, they have made Air India bankrupt by their corrupt and criminal deeds. Air India's past CMD Arvind Jadhav and past Aviation minister Praful Patel have looted thousands of crores of rupees of Air India in various ways and saddled it with a cumulative loss of over 60,000 Crore Rupees.

LOL.... oh I would so love to talk about that

A prominent magazine once said Scam's in UPA regime is bigger than the budget of a developed nation. I kinda agree with it. The money involved is no more in million..but in billions and trillions.

That's too much for any government. I am still wondering how did Robert Vadra managed to make that kind of money. I guess it's not just the dancing skills that's needed to make it that big.

5. Security of it's citizens :

As mentioned earlier that these guy's definitely don't have our backs covered at the time of any terrorist attack but they are equally helpless in case of crimes against women, children and aged.

Just open any day's newspaper. It would be filled with horror stories relating to Female infanticides, Child abuse, Rapes. Murder of elderly people. Whilst the crime incidents of counterfeiting increased by 91 per cent during the period, cases of rape, molestation, dowry deaths and theft too kept pace. Rape cases grew by 47.51 per cent and molestation by 30.82 per cent while dowry deaths and theft cases rose by 21.31 per cent and 14.77 per cent respectively. Put together the cognizable crime rate grew by 25 per cent during in last 10 years.

6. Maintaining respect in the eyes of it's citizens : 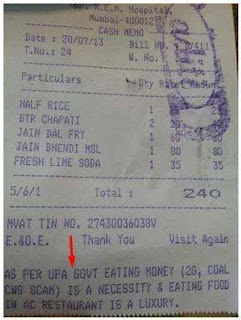 It wouldn't be wrong if I said that the names like Man Mohan Singh ; Sonia Gandhi and Rahul Gandhi , Kapil Sibal are often used in order to criticize or mock them. I have often heard pretty funny jokes about these characters. I have never heard anybody, say anything about these people. The scams had already tarnished their image. But their attitude towards the offender and it's own citizens were equally bad.

The apathy showed by our current government is heart breakng. Pakistan had been messing with us since long. There people come and kills hundred of innocent people and what does this government do and say " The peace talks are on but we won't play any cricket matches with pakistan." Wow that's a huge punishment to them.

They kill indian soldiers and send their Mutilated bodies.... just saying we condemn it strongly will not get bck the dead. Actions need to be taken . The very laid-back attitude of the government towards pakistan,  is killing. I as a citizen feel helpless and my head hangs in shame. I really wish like America, even we can give robust responces to Pakistan's idiosyncrasies. How long are we going to run to the teacher (US AND UN) and keep complaining about the bully (Pakistan). One day we have to stand up for ourselves, do something offensive, so that they know we don't take things lying down.

Ciivilans treated shabbily (delhi rape case agitation and the police trying stop it with force water canons and tear gas ) while Salman Khurshid inviting Pakistani delegates for dinner soon after they kill our two jawans. How fair is that?


I would like to sum it up for all the readers, who cared to read till the last, trust me UPA is not an option any more. We all deserve better.

Email ThisBlogThis!Share to TwitterShare to FacebookShare to Pinterest
Labels: My thought processes